You have no items in your shopping cart.
Search
User
Phone
Cart

We often get questions about why we use specific cereal grains in pet food. For example, why do we use rice, wheat, corn etc.

What is the difference between the cereals? Which are the best cereals to meet the pet food parameters below?

• Digestibility- most important for dogs which have gastrointestinal problems

• Allergens- problems for dogs that suffer from allergies

• Glycemic index- most important for dogs that suffer from diabetes

• Carotenoids- important for immunity and also for coat colour 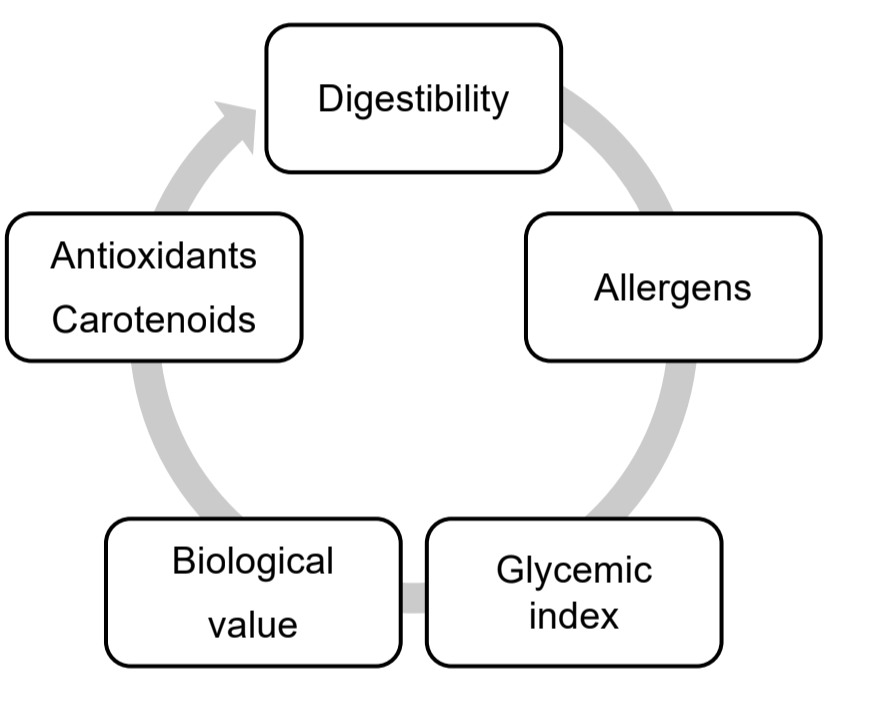 The most important conclusion is that: Not all dogs have the same requirements - not all dogs need the same food!

So, it is important that you understand the different properties of different cereals.

Advantages of rice Rice is known as the best cereal in pet food. It is the cereal with the highest digestibility. It will always be the first-choice cereal for dogs who suffer from gastrointestinal disease. Dogs which have problems with diarrhoea or other gastrointestinal problems will benefit from a rice diet. Another important advantage is that because rice is gluten free, it is the most hypoallergenic cereal.

A disadvantage is that the price of rice is at least twice that of wheat or corn. Because of this, rice is normally found only in high/super premium quality pet food. Another disadvantage is that rice has a high glycemic index. This means that rice is digested very rapidly and sugars go quickly into the blood. The result is that the body may need more insulin than for other cereals which are digested more slowly. Dogs with diabetes sometimes are better not fed rice. But it is not only the cereal type which influences carbohydrate digestion; the presence of fibre can slow down the rate of digestion, so it is possible to make rice-based pet food which can be used for diabetes. In the Husse product range the Light formulae with lowest fat and highest fibre content can be used for dogs with diabetes.

The different types of rice.

JASMINE AND BASMATI RICE: are long-grain varieties that have been cultivated to bring out distinctive flavour profiles. Used in Indian and Asian dishes. Suitable also for pet food.

BROWN RICE: is also available in long and short grains – is a lot chewier and healthier than white rice and takes about twice as long to cook.

There are different colour and different sizes of grains. But this does not influence the digestibility. Classification, depending on the grain type is: long, medium and short. We then have rough (where husk is still around) and milled rice (where husk has been removed). 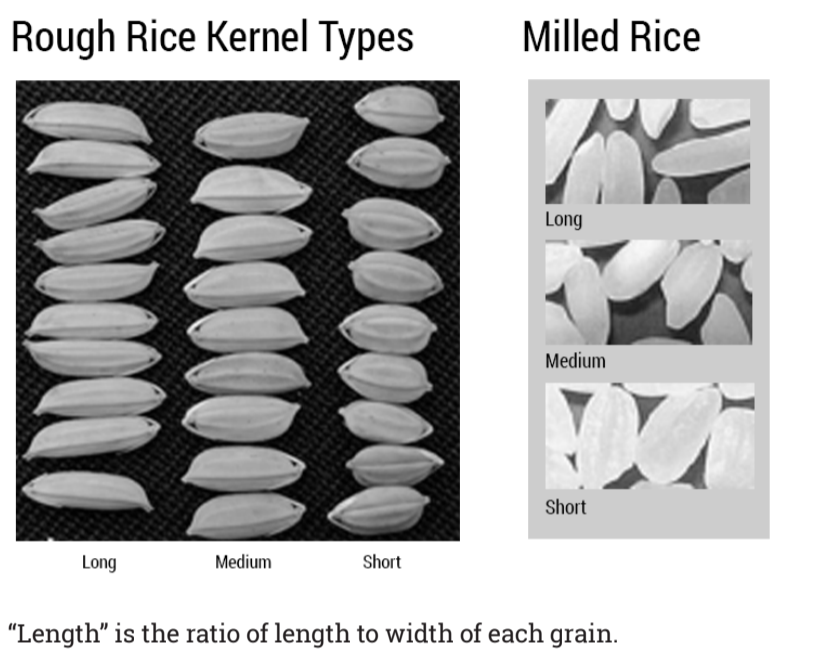 The anatomy of a rice grain

Natural rice/ wild rice after harvesting, there is a husk/ hull around the rice. In the picture below you can see the paddy: wild rice intact with the husk. After removal of the husk you obtain brown rice. You can find brown rice in all varieties and “brown” means only that the husk has been removed. A further stage in the process is the removal of bran, when you obtain white rice/ milled white rice.

• Paddy (rough) rice: where the husk is still around

• Brown rice: the husk is removed

• Milled white rice: the husk and the bran have been removed

• Retort rice: filled into a pouch and heated

In Husse food we use long grain rice which is a mix of paddy rice, brown rice and white rice. 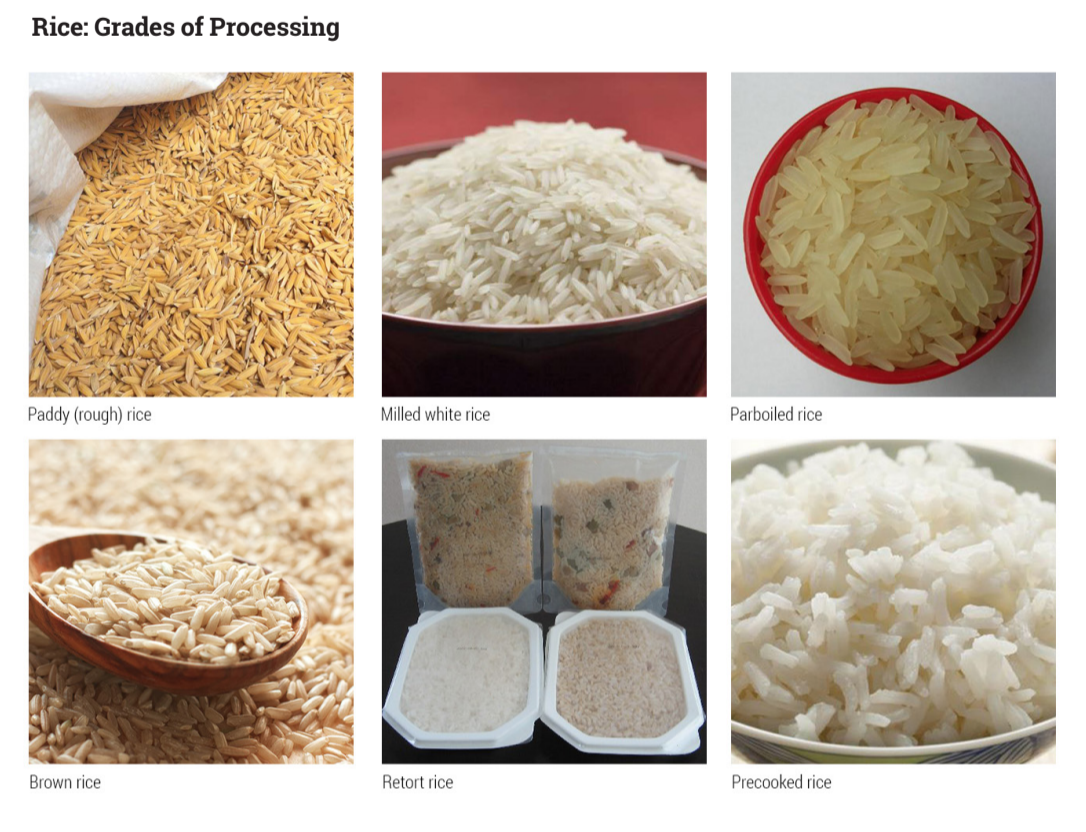 Positive properties of corn are: good digestibility, gluten free, high level of carotenoids. Corn is a very interesting cereal in pet food. It has good digestibility, nearly as good as rice. Like rice, corn is gluten free and is an hypoallergenic cereal. The yellow colour of corn is due to carotenoids. Carotenoids are natural plant pigments which are very positive for good health.

Amount of beta-carotene in cereals 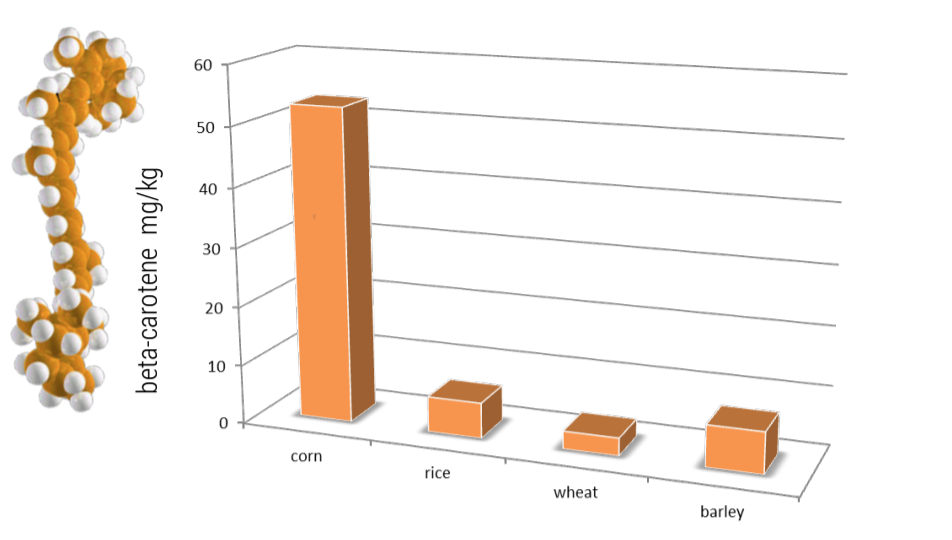 Beta-carotene is a powerful antioxidant and improves cellular immunity in dogs. It is very positive for nutrition. Some white dogs can get an orange coat when fed higher amounts of beta-carotene. Because of this some customers avoid corn. Advantages out-weigh disadvantages in the use/presence of beta-carotene in the food.

Some studies done on German Shepherds prove that diets with high levels of beta- carotene give better immunity. In the graph, you can see the level of lymphocytes - the white blood cells which help the body fight disease. The more beta-carotene in the food, the more lymphocytes there are in the blood. So, high levels of beta-carotene mean better functioning of white blood cells. 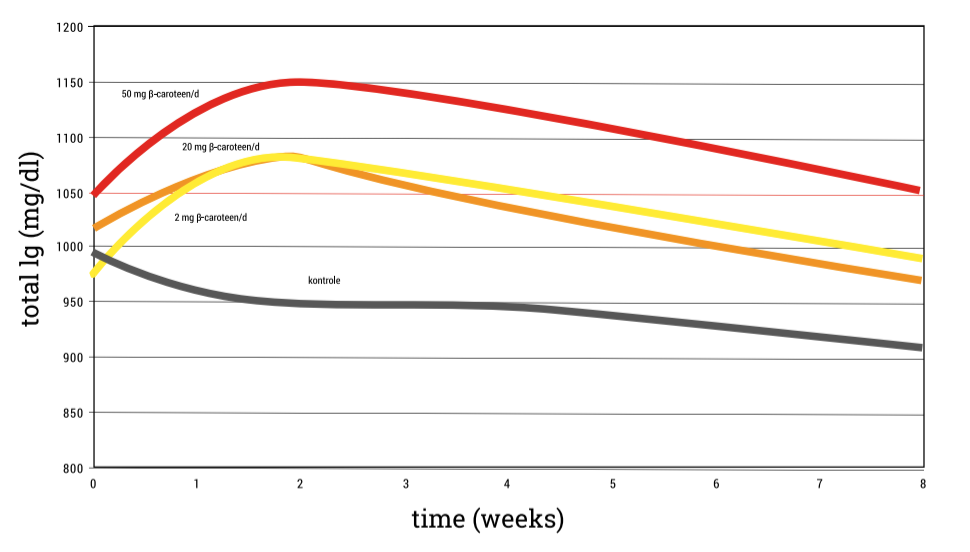 The presence of beta carotenoids or corn in food can sometimes influence the coat colour in white dogs. You can see an example of two Samoyeds. One has some orange pigmentation, the other is completely white.

• The slightly orange coloring of the left samoyeed is a normal, non-harmful coloring of the coat which has nothing to do with allergic reactions, or infectionswhich cause pruritis, itching or inflammation

• A white colour is often not natural for the breed

• If a white coat is required for show dogs: avoid food supplemented with carotenoids or salmon oil

Wheat is an important cereal and it is the most cultivated cereal in Europe. For healthy dogs it has good digestibility. Wheat is also rich in glutamine, an amino acid that is important for a healthy digestive system.

A negative property is that wheat contains gluten. Gluten can cause allergic reactions in dogs with sensitivity, so for dogs that suffer from allergies it is better to avoid wheat.

Wheat proteins for pet food/ nutritional properties For healthy dogs which are not allergic, the presence of wheat is beneficial. Wheat has a very digestible, high protein concentration (80%) This results in 93% digestibility for dogs.

Wheat is also rich in methionine and cysteine (30.7 g/kg). It has no anti-nutritional factors, a low fibre content (< 1 %), neutral colour and taste. It is also very rich in glutamine (more than 30 %), which has a nutraceutical effect on intestinal health.

Wheat proteins in pet food/ benefits of glutamine Glutamine is known to have a nutraceutical effect which improves the physiology of intestinal cells. It supports digestion and lowers the coincidence of digestive disorders in healthy dogs. It reduces the risk of translocation of pathogens in the gut and improves immune response.

• Supports dental health with mechanical cleaning of the teeth